“Here’s nothing. Not make something of it.”

That’s the dialogue that plays out in my mind whenever I encounter an ingenious act, production, or someone’s rags to riches story. That’s what I heard today standing on the corner in Winslow, Arizona.

If that last line sounds familiar it’s because you’ve heard the Eagles sing it as “such a fine sight to see: it’s a girl, my Lord, in a flatbed Ford slowing down to take a look at me.” The good people of Winslow – or in the scenario of my conjecture, one irritatingly persistent musician turned businessman who saw the potential tourist attraction no one else could see and convinced enough towns folks to approve it – turned a random corner of the city into the main reason people stop and on a sleepy Sunday morning line up to take photos with a statue of a man and his guitar positioned in front of a brick wall with a mural of the aforementioned girl painted as to appear to be a reflection in the window.

An eagle is even perched on the make believe windowsill to offer credit where credit is due. The band’s songs blare out of a nearby store where mostly motorcycle mamas and t-shirt clad families familiar with the Bedazzler can stock up on magnets, more t-shirts, shot glasses and caps. 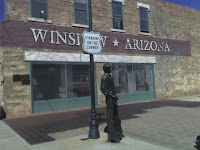 We asked and the town boasts a population of around 5,000. I think the source was being generous. But what they lack in volume they make up for in ingenuity. The Penney’s building on which the mural was painted actually burned a few years ago but the wall was saved and a park is soon to grace the backside of the now singular wall that attracts visitors every day.

The whole experience made me smile. Of course, I was in a better postion to do so after having FINALLY found a restroom. I mentioned Winslow is sleepy and on Sunday morning everyone and every business (save those two tourist joints) were on an extended siesta. I was contemplating spots on the side of the road when we were vainly searching for some relief when I spotted a hotel. La Posada claimed to be open though we saw signs of either destruction or con when we drove up. I didn’t care. I raced inside. 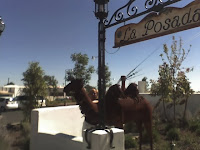 As focused as I was on that particular destination I couldn’t help but take in a deep breath when I realized this was no rundown, run of the mill, sleeping establishment thankful for the occasional RV driver who is longing for a hot shower and a bed with box springs.

The high ceilings, heavy wooden beams, New Mexican color scheme and artwork practically shouted at me to slow down. I glimpsed indications that I couldn’t make this a slam bam thank you mam kind of visit as I desperately sought out the relief facilities. When I had concluded my business, I gave them some with the purchase of a small basket I thought the folks back at my former business could use as a thank you for my going away. Then I went in search of Stan.

He, of course, had found the other gay man on the premises who happened to be the hotel clerk or manager. Engaged in conversation when I approached, Stan paused to update me on what he’d discovered thus far. The hotel was popular in the 30s, abandoned in the 50s and had been empty until it was restored in 1997. Our new friend and self-appointed tour guide seemed inspired by our obvious pleasure in the place or Stan’s cute legs and offered to show us some of the rooms, each decorated differently. They were named for famous celebrities and politicians that had once stayed in the resort stop for trains back in the day. His favorite was the Harry Truman room with its king size bed and Jacuzzi as well as a sitting area that overlooked the garden. I preferred the double jaccuzzi next door as I had just finished one of my sensual stories I’m working on apart from this blog and it seemed like it would make an excellent setting.

Betty Grable had a room. Jimmy Stewart. Howard Hughes actually stayed in the room that they had graced with his name. I asked if the hotel was doing well given that the evidence to date was that it wasn’t exactly a thriving metropolis and he assured me that they were constantly busy, booked up to a year in advance and currently working on opening up 10 additional suites.

Our guide’s story was an easy one to retrieve. I just asked and discovered he had five kids (we saw pictures of when they were small) had been born in the area but left until the kids (note that it wasn’t the wife) asked him to return and he’s worked there for a year to date.

After a bit more small talk, he left us to explore and I returned to a room of paintings that I’d seen from the corner of my eye when in search of the ladies room. The mural at the top of those steps was at least 30 feet wide and still allowed for another of the same size on its right should they ever need to display another. The name was as intriguing as the artwork which at first seemed to be a party scene but upon close inspection appeared to be table after table of corpses, each painted carefully to resemble folks you thought you might know. Sure enough, when we read about it we learned it was A New Years Eve Party in Purgatory with Liberace Dropping in from Heaven Just for the Hell of It. The notes helped us out by identifying some of the guests – Marilyn Monroe, Sid Vicious, Jimmi Hendrix, and a couple of artists Mark Rothko and one local one who took his life upon learning that he would soon be blind. The artist is Tina Minon and after reading about another large painting she’d worked on just before the Berlin Wall fell in which she juxtaposed nuns with Babushkas, we discovered that she had married the man who had first established some international peace walks she’d been part of and that the two of them were the owners and chief renovators of the hotel!

Ingenious and serendipitous are our words of the day, kiddies!!! A bathroom break prompted the setting for what will have to be a focal point in an upcoming story, an introduction to some local lore, and a touch of cuteness for Stan to enjoy. One woman’s investment in her own sense of justice netted her a new life in Arizona. And one small town is now more than just a spot in the road.

Sometimes takin’ it easy is the only way to go!
Posted by KC at 6:51 PM