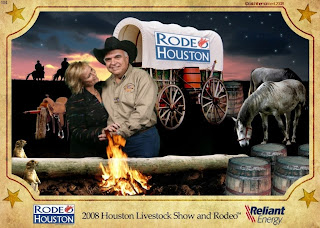 As of April, I will move from having no paying positions to having two!

I'm still not making the kind of money I once did, but as I told an acquaintance recently, I made the choice for having less and doing more when I left the career I'd invested 23 years in.

I'm not complaining! By all accounts, these last six months have been every thing I thought they'd be and maybe even a few things I didn't fathom were possible!
Posted by KC at 3:01 PM No comments:

Will Volunteer for Food

Asked what I was up to this weekend, I replied:

As soon as I leave my volunteer position with the campaign, I'm heading to the theater to serve as a volunteer usher and then will wake up on Saturday to volunteer at the AIDS hospice after which I'll go to the rodeo where I was a volunteer in order to now be getting in free.

60 Miles from Crazy and Driving Below the Limit

My buddy asked me yesterday if this was like my other jobs with the theaters where I usher for free, and Bering Omega where I work at a hospice for free, and the rodeo where I speak for free and Africa where I did my communications stuff for free.

So if you're wondering if that's what the quotation marks are about, then yes, it is.

Still, I feel I'm going to be employed. And, in fact, I may eventually make a few dollars. But the point of this year is to gain experience more than income (and I can happily report that part of the journey has been tremendously successful).

So Monday morning I'll report to my new office -- running the campaign headquarters of my state representative.

First, I really respect the candidate. She won her first term a couple of years ago and has proven herself over and over to be beyond the barriers of party lines and about education, health, and things I hold dear. Plus her right hand woman is a good friend of mine and soon to be my boss.

I told the rep during the interview that I took this year off to do the things I could have never done in my old position. I explained that in Africa, I had regained the passion that I had once held dear whenever I helped a person live into a passion that drove their every step. And I readily admitted that I was clueless about most things political.

Still she "hired" me. I think her only reluctance was the thought that my church background might make me a tad sensitive to what she described as her irreverence.

Is that laughter I hear coming through the Internet???? Yeah, I laughed too.

My friend/and now boss is beginning to send me emails for my to do list on Monday. Today she asked if she was driving me crazy.

"We're 60 miles from Crazy and driving below the limit at this point. No worries," I replied. And, frankly, it's true. I'm sure it's going to get strange, wild and maybe even hectic.

I plan on enjoying every minute of the ride!
Posted by KC at 6:44 AM 2 comments:

Sweet Life Is the Sweetest Revenge

Some of you may remember the car dealer who "traded up" last year (my phrase) by dumping me for a woman who he felt would help him make needed connections for his business.

I saw him Tuesday night.

My girlfriend and I were at the rodeo and, I have to say, looking the part. We hadn't crossed the line into cowgirl costuming (this year's trend seems to be mini-skirts with boots and/or short shorts that make the hot pants of the 70s look like Scout uniforms). We weren't trying (as many implanted and tucked psuedo-blondes our age) to pull off younger or hip or anything other than comfortable.

Jeans and good living were are only adornments as we checked out the scene. A quick survey of the second gathering point netted me my prey. After a year of tsk-tsking his behavior and knowing that no matter what his choices did to his bottom line, he was the one who would come up empty, I saw him standing three feet away.

Now, at this point, I could have walked away. He didn't see me. But where would be the fun in that?

He almost gasped. I smiled ... actually, I beamed. He was at least 20 pounds heavier and showing wear and tear. I was . . . as I said . . . totally comfortable and happy with the moment and me.

He stared then and took in every inch. I knew that the longer hair, the post-Africa glow, and the cowgirl confidence was making thinking a bit difficult on his part.

He asked how I'd been, checked on my dating status, introduced me to his friends (which I did as well), told me about his rodeo involvement, asked more questions. I answered, offered up juicy bits like the whole "I-quit-my-job-have-been-traveling-and-just-spent-six-weeks-in-Africa" line that elicited the now all too familiar "holy shit" look.

In the midst of the interview, he stopped short to add parenthetically, "My God, you look fantastic!"

I merely patted his arm and complimented him on the fact that his taste had only improved.

I suggested he might want to get back to his friends as I had merely wanted to say hi. He hung on a bit longer and finally, complied.

Later I realized that I had actually used the "shoo fly" motion as I directed his attention back to them.

The music that night was adequate. Our energy fell short before really getting to enjoy the dance floor. But nevertheless the wild, wild west was alive and well on Tuesday at the rodeo. Sweet life indeed . . .
Posted by KC at 6:07 AM No comments:

Since Landing on Thursday (And Now It's Saturday)

My hairdresser and good friend was able to fit me in and I got a cut and color before anyone other than the MIS (man I'm seeing) had a chance to explore the wonders of my roots becoming the dominant feature on my head!

I ate the first Mexican food I've had in over six weeks.

I drove my VW once again.

My feet are now actually clean . . . and the nails are nicely polished, thank you!

I attended my first ever BBQ cookoff and when I put a piece of chicken, a couple of slices of sausage, and some brisket on my plate I realized that was more meat than I'd eaten in the last six weeks.

I danced until my newly colored hair was soaking wet.

I dressed as a rodeo clown and mingled among the special needs kids who were on hand to see the parade of horses that signals the start of the Houston Livestock Show and Rodeo. And then I ran the parade. Please note that I said "ran." We were behind a float on wheels rather than hooves and were supposed to keep up with it. So instead of the leisurely stroll I anticipated we booked the entire parade route. I did a rodeo clown version of wrestlers' high fiving the crowd to at least engage a bit. I also sweat some more!

I planned a party with Roger to do some show and tell related to the trip on Sunday.

I fought the urge to say "asante" and "pole sana" on numerous occasions and went with "thank you" and "I'm sorry" instead.

And I thought of the hills of Karatu and the people I left behind every other hour.
Posted by KC at 1:28 PM No comments:

Don't Want to Lose This Moment

On one of my last days in the office in Karatu, the director was chatting with her staff and when one of them offered to take care of a certain task, she inquired with a joking tone to her voice (because hey, she's the director!), "Promise?"

They said yes. And then as almost an afterthought, she asked, "By the way, what's the Swahili word for 'promise'?"

They paused. You could almost imagine the sound of shuffling feet coming from the room. She asked again.

"Aha!" the director exclaimed. "That could explain a lot of things!"