Emerging from the dark, tar-like lake of
confusion
I am suddenly awash in revelation
And knowing that I can no longer be held
against my will
I wear my tightly gripping, freedom-dripping
garments like a bridal gown
And dance

Early
I wanted to be found
Early
Almost as soon as the game began
Then I could laugh and play
With someone --
Even if it was “It,”
Even if it meant losing.

Safe at home
Was a destination
For those with the desire
To run for it.

I wasn’t a risk-taker
Back then.

And seeking solo?
Me as It?
No thank you.
Too many what if’s and might be’s
Lurked around each corner.


Now
I still want to be found.
I still care more about playing than winning,
And safe at home only matters
If there’s someone to share it with.

Though now willing to risk,
And no longer afraid of possibilities,
I nevertheless prefer to be sought
Rather than seek.

I long for
Someone to look for me,
For who I am,
What I can do.

I still want It to come to me.

One night at Roger's and the soup's on

Splashes of color collide across the room
As arms embrace and backs are patted
The room has a big band sound
though not an instrument is playing
There's exuberance, joy and the ever
present suggestion of possibilities
Lingering like an aroma you're sure
you'll never forget but whose
name you can't recall

I'm a party
To such gatherings
Because the unknown is open and no one
is guarding the door
Once in, I'm accepted
And find so much more
Than I can express
Show, feel
And I have no doubt
I'm among friends

Silence was the fourth presence in the room.

"E" hung back -- a reasonable stance for a junior in high school who was spending her first day as an AIDS hospice volunteer and about to assist with her first bed bath. The nurse had suggested that perhaps “V", the new resident had suffered from a nervous disorder prior to acquiring AIDS, given that she came to us from a nursing home and was clearly not over 40 years of age. We were all in one small not-quite-a-hospital-but-not-really-a-home room. Both women said very, very little.

I, on the other hand, was supposed to be in charge. "E" had agreed to help(since she was the only other female volunteer this day and we feared “V” might be even more timid around men). I promised that I expected only what she felt comfortable doing and, quickly pointed out, that I served as a volunteer for 7 years before I took on the role she was about to do. I hoped it brought her comfort to know that, but there was little sign of discomfort or anything else coming from her. My buddy and cohort had already noted to me privately that the girl seemed almost devoid of personality.

Thus the silence in the room.

I indicated “V” should speak up if I hurt her in any way as we prepared for the bath. She said she would. She never did. But she also never said thank you for the extra foot massage and lotion we applied. (And yes, it was “we.” After only a few quiet moments, "E" stepped right up when I needed her to fetch a towel or extra pair of socks. Then when she was putting the clean socks on, she asked “V” if she wanted lotion further up the leg I had initially worked on. When “V” said yes -- and that was all she said -- "E" took care of things.)

“V” did speak up when she needed to pee – which she did in the bed pan I provided. "E" was out for towels at the time and missed the moment – And yes, I’m referring to the speaking, not the peeing.

The interesting part of the story to me is that I lived in the silence and I cleaned the bed pan. Ten years ago when our little care group started volunteering at the hospice, I gagged at the thought of bodily fluids and would clean numerous toilets, wash clothes all day, and cook pounds of bacon in order to do my part without having to be in the room for baths, diaper changes or wound care. Ten years ago I thought all voids needed to be filled with words of some sort.

Today, I realize comfort takes many forms – including the presence of silence.

"Enough" seems so distance then
But soon
"Enough" is there, staring me in the face
And then

Mary was in many ways the antithesis of me. She spent most of her life in a factory job, living less than 15 miles from the spot where she was born. She raised three boys. She stayed with a husband who was abusive. She had a death grip on her faith and her church world and yet when faced with death, she questioned what she was actually holding on to.

I have created an identity heavily dependent on what I do and that profession has taken me across the U.S. and numerous countries. No children. And I left a good man who simply wasn't able to give me what I wanted. (Much more complicated than that and yet that is still truth.) My faith has always been a roller coaster ride and yet when this favorite aunt asked me what was next for her -- as she lay dying in her bedroom this summer on my final visit with her -- I said with some unnatural assurance that she was in store for something better.

Mary died while I was out of the country. Cancer finally accomplished the task it had started a couple of years before. I knew the day was coming and that I wouldn't be here for the formal celebration of her life so I made sure I had few moments with her in the final days.

She opens her eyes and speaks directly to me . . . something she hadn't done in the half hour I'd been in the room.

"Do you think I'll see my children? Do you think it will be ok?" fear was evident in almost every syllable.

I grinned, "I think you're going to see more of them than you want! But, yes, it will be ok."

"I don't know much either. But I know it will be better. It's ok to do what you have to do."

And in that moment, I did know it would be better. Better than beeps and smells and pumps and intrusions by doctoring personnel with good intentions. Better than fretting over who had forgotten who, what had caused the riff here or there, was this or that "good enough."

Mary was a practical woman with a contagious laugh. She didn't understand all the changes in her world and rarely liked them yet she kept going, anticipating "better" even when evidence had proved otherwise for years.

One of my last encounters with her in semi-health was over a year ago. I took my best friend to Tennessee and a family reunion. She was delighted with how charming he was, offering up the ultimate compliment from a southern woman, "He's the cutest thang." And only once did she ask if we could "convert" him.

"Just checkin'. 'Cause you know, I just want you to be happy," she replied still clutching to the idea that happiness rested in a man's hands.

She was my hero, not because I agreed with the choices she made, the beliefs she held to, or the life she had. She was my hero because she simply was who she was.

I shared a favorite Langston Hughes poem with my mother and Mary once. Mary loved it, calling it "hers."

Here it is with hopes and prayers that Mary is indeed in a better place.

Mother to Son
by Langston Hughes

Well, son, I'll tell you:
Life for me ain't been no crystal stair.
It's had tacks in it,
And splinters,
And boards all torn up,
And places with no carpet on the floor --
Bare.
But all the time
I'se been a-climin' on,
And reachin' landin's,
And turnin' corners,
And sometimes goin, in the dark
Where there ain't been no light.
So boy, don't you turn back.
Don't you set down on the steps'
Cause you finds it's kinder hard.
Don't you fall now --
For I'se still goin', honey,
I'se still cimbin'
And Life for me ain't been no crystal stair. 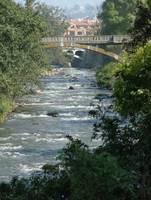 where are you in this photo? the bridge? the river? the trees? the city?

It was what it was and
It was good.
Now
It is what it is and
It isn't.

She pats and smears and smudges
Lips, eyes – the face held captive in
the compact’s mirror
Beauty to behold
Yet the Beast is only an arm’s length away
Ready to devour and consume

So, accepting a shared reality,
I’ll give the girl her due.

But Covers Do Help Sell the Book

I know I'm not supposed to judge. Who I am anyway? Just an average looking woman with average intelligence. But I can't help it.

Last night I went to a presentation on what's driving Houston economics. I thought I might get a story on trends out of it. If I'd understood more of what was said, I might have. Unfortunately, I'm not an economics kind of gal (do you even want to know that I don't keep up with my checking account?), and soon I was floating in and out hearing words like gross products and poundage of containers and the value of rail over trucks and nanotechnology and . . . (I could tell you more if I'd only understood them).

So I grabbed a lifeline. I started studying the panel of over 50, white executives that were pulled together to give us this update.

One guy is with the railroad -- an industry with a definite inferiority complex. He sat, spoke, and looked like the second cousin you invite to Thanksgiving dinner only because you bumped into him at the grocery store with a buggy full of turkey fixin's.

The port authority had more numbers in his head and flowing with increasing speed from his mouth than I have freckles on my body. (And let me assure you that a connect the dots game with me would keep one of us amused for hours.)

I liked the Andy Rooney look-alike. He was on every non-profit board imaginable and had a great voice. But he was the one who kept bringing up nanotechnology. Enough said.

The city rep was the easiest to understand and had a breadth of knowledge that I found fascinating. Unfortunately, he also had a Texas twang that made you think someone was about to come onstage with a banjo and washstand for a little pickin' and grinnin'.

I wanted to understand. I wanted to share the info I gained. But what I did was come to the conclusion that power has many faces, many voices. And many (most?) belong to older white guys. 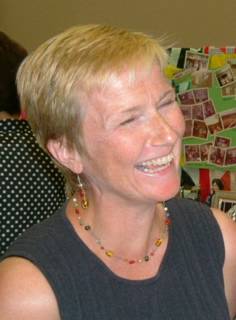 Leaving the editor behind

How many times have I allowed the editor in me to rob me of an adventure?

Thoughts of "what might they think/say" kept the words in, the actions beneath the surface. This blog (complete with unedited tagline and apologies only to ee's sense of style) is my attempt to focus on learning, on accepting the invitation to the dance, on sharing the joy of living with less worries regarding rules and regulations.

While I hope to craft some thought-provoking pieces of my own, at the moment, I think Mary Oliver sums it up best for me:

I don't want to end up simply having visited this world.