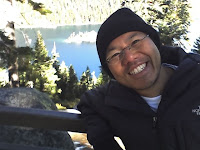 Larry and I have had several discussions about his veganism. I applaud his commitment to living his convictions. He understands that I don't have that same level of conviction. And we both allow ourselves the space to just be. Makes for a peaceful co-existence.

But the conversations have been lively and fun. For instance, he might mention that some vegans choose their lifestyle out of respect for creation. They don't want to kill anything -- even mosquitoes. I counter with the surprise fact that I've practiced "capture and release" form of pest control in my abodes for years. If I spot a cockroach for example and it's possible to shoo its crunchy exterior out my front door, I will. However, if a blood sucker comes my way, I'm all over survival-of-the-fittest and given that I'm a little higher on the food chain the circle of life is going to start back at ground zero as far as that critter is concerned.

(calming from my mounting aggression . . . breathing) So, yeah, I get the respect for that which has been created. But I also think in systems. And a system of predator and prey seems to have been established for balance. While hiking part of the Tahoe Rim I learned from one of the guides with me that in order to protect the lake from the possibility of being destroyed by fire, they have to thin out the trees. Now some folks don't want the thinning. And some folks don't want the potential for devastation. Leaves me wondering what the system can hold or if we don't sometimes come to a point where new systems must be established.

Pretty deep question that pretty much originates at the mosquito question. At this point, I'm still under the influence that the "way of the world" demands that things get squashed, trees get thinned, and folks with no power must rely on advocates to advance.

If someone's come up with a way that works that allows power brokers to discuss it over a steak lunch, we may have a new answer. Until then I continue to view myself as what I long ago surmised was a "pragmatic optimist". I want to believe there's a better way but until we find it, I'll do what I can to build up my muscles for the wrestling match around the corner.

By the way, Larry has chosen his lifestyle because of the corporate powers that control so much of the world's resources that their waste could feed third world countries. He's a good man with a big heart and an evolving definition of what can go on his plate.

One of my favorite choices is portabello . . . juicy, meaty tasting, and no guilt . . . the kind of food that makes you feel exotic even if all you do is put a slice of cheese on it and call it a burger. Not unlike this new life I've chosen, heh?
Posted by KC at 10:08 AM

If we left the trees alone, Nature would thin itself, just not according to human's liking, development goals or timetables, yet Nature's been at it a lot longer than humans...survival of the fittest indeed!