While someone has already suggested that this was just a bit too dorky for their taste, I have to brag on my buddies and I for how we chose to recognize the numerical phenomena of the past weekend.

Having planned on an hill country exploration for the post-July 4th weekend, we gave up when the hills were alive with the sound of rushing floodwaters! Then after checking out our options, we discovered that the Austin area stood a better chance of being dry than any other drive-to locale near Houston. So we decided to pack the blow up bed and descend on our friend Geary who is studying in our capitol city.

Roger, Brittany and I made it over on Friday night and on Saturday morning over coffee, Brit, Geary and I determined that we should somehow observe the day's significant 7 nature.

"Let's do at least 7 things," I think our Austin virgin Brit was the first to say that one.

"And each of us have to do 7 things we've never done before."

"As long as they're small ones."

"And we talked about going to a winery so we'll taste 7 wines."

"We are also going to Pedernales Falls so we'll take 7 photos there."

"And I want 7 trashy souvenirs," again this from our virgin.

So the plan was set. Roger, who had been in the shower, had no argument against it and we set off.

The Magnolia Cafe was our first stop and there I did something I have never done before. I engaged Brian our waiter regarding his tatoos (that I have done) and then requested his help in accomplishing our goal by assigning him the task of locating 7 things in his kitchen that he could give me (that I've never done). He willingly and thoughtfully complied with a to-go box that even included a pink crayon because the cafe used to be known for the pink flamingos the staff wore on their shirts.

By the time the day was over, the two waitresses in the wine bar had come over to our side as well. Lisa changed the way they do wine flights at Cliffords outside Dripping Springs to comply with our request for 7 tastes. And when the alarm went off that 7:07 p.m. was approaching, Jessica let Roger leave without signing the bill so he could join in our recognition. When she heard what we were doing, she asked to join us (bringing the credit card slip) and her own word to add to the seven words of kindness we were speaking into the universe on a Texas hillside.

And, Jessica added her favorite, "Love."

Mt. Bonnel, the capitol, Lake Travis, The Drag, UT campus, Amy's Ice Cream, and the State Cemetery were the sites we chose to note as our 7.

We didn't quite make 7 meals but since the last stop was a 7/11 just before midnight and we were at number 6 by that point we thought we would give ourselves points for the location alone!

Asking folks to get involved with our little project on at least three occasions was totally outside of what I might have done once upon a time. Eating at the South Congress Magnolia Cafe and standing in the waters of Federnales Falls were also first-time events for me. The Mansfield Dam, which I'd never seen before, had four flood gates open to deal with the rising waters that had so threatened this area. And I saw at least 7 famous Texans graves in the State Cemetery. Ann Richards still doesn't have a stone by the way!

When I shared the story with e, she pointed out that by the time we had enlisted the help of others, our merry band of 4 had become another complete 7. 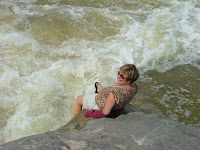 Dorky? Cheesy? Are you kidding? I'm amazed and inspired!

That's pretty awesome! Here's my July 7th story: I was playing in a texas hold'em tournament at my brothers house and there was a pretty big pot built up (lots of chips to win) and this guy just goes all in. He got a caller - which means he even won more chips because he had two sevens in his hand and there was another one on the board to give him three of a kind! He said he knew he had to go all in with trip-sevens because it was 7-7-07!