Christmas Spirit with a Twist 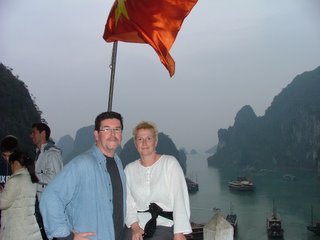 Roger and I were in a small northern mountain village in Sapa, Vietnam for Christmas. We discovered they had a Catholic church and determined that the least we could do would be to drop in and see if they were having some sort of service.

"Some sort" would be an adequate way to describe what we found.

A mass may have been planned for later but we didn't notice any signage saying so (of course, it may have been quite evident to anyone who could read Vietnamese). When we arrived, however, there was quite a bit of action.

The sound system was blaring Vietnamese music. Yes, the twangy, screechy stuff that I'm sure is amazingly beautiful if you can hear it clearly and understand the intricacies but over a bad system just sounds loud and even hurts a bit. A few foreigners were sitting in the back on the wooden pews but otherwise the seats were empty and the crowd was gathered at the front of the sanctuary.

Making our way to the front -- guided by the string of Christmas lights draped from manger to the bright star of lights hanging dead center above the pulpit area -- we found folks vying for the next opportunity to make a donation and have their photo made with Baby Jesus . . . in the manger.

We decided we didn't need to take anyone else's turn from them so we, too, went to a pew and sat waiting. Not much changed for several minutes other than my head began to suggest that if the music continued at its present volume an ache might be forthcoming.

"I don't think I can take much more of this," I shouted to Roger who was by my side.

"Me either," he shouted back.

"How about we say a Christmas prayer and move on?" I yelled.

And so we gave thanks for being where we were, for the friends and family who love us even when we choose to be in places like Vietnam for Christmas (and maybe even because we do), shared a kiss on the cheek and exited the building.

We proceeded to some of the shops and I found the perfect gift for my pastoral family -- a manger scene complete with a water buffalo carved from soft stone. Not really into bargaining, I went with the second price suggested by him.

Roger on the other hand decided that his purchase was worth wrangling over. So the young artist began to wrap my manger while alternately listening to and ignoring Roger. Soon he had me set.

Surprised, I replied, "Really? How sweet! What was it?"

"A laughing Buddha," he answered with not a trace of irony in his voice.

Buddha and Jesus on Christmas Eve in Vietnam . . . perfect, I thought.

With gratitude in my heart and Roger's bargained for but sans bonus Buddha under his arm, we made our way to our Christmas Eve dinner . . . Italian pizza in a small cafe with a blinking Christmas tree and ABBA blaring over their sound system.

Perhaps not a Silent Night, but in many ways a Holy one.
Posted by KC at 2:49 PM